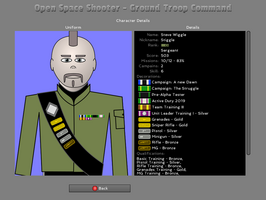 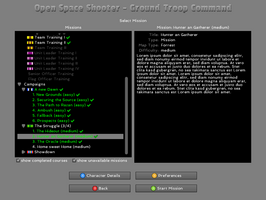 Version 0.3 is released the main focus of this release was to implement a mechanism for the player to advance the character. As the game progresses the character can be promoted in rank. But the promotion always has some preconditions like total score, number of missions or campaigns completed.

The promotion is sometimes also depending on a certain qualification of the character. These qualifications can be courses or trainings. A course is a kind of tutorial mission where you will learn certain things about controlling the character, using some kind of equipment or give commands to your fellow soldiers.

A training is a mission where you can show what you have learned during a course. Your performance during the training will be evaluated. For some promotions you need a certain score during a training. The courses and trainings are not yet implemented and currently are occupied by a place holder mission.

Some trainings, the completion of a campaign and some other achievements are now shown as decorations on your uniform in form of service ribbons or badges.